As I mentioned on Twitter, I think I know how Sisyphus would feel once arrived at the top of the mountain. I’ve made one level every single day since January 1st. And doing so, I’ve tweeted about every new level with a screenshot and a number. We’re now beyond 182/365. While screenshots are numbered in chronological order, the internal level IDs are numbered in reverse order so the latest level stays on top of the list. Which means in the editor, it’s kind of a countdown to 1, with a value that started at 365 and now below half of this number. If we drew two lines, they would now have crossed.

It seems downloads are still increasing. On the 1st of July, we were at 21,269 downloads, vs. 16,783 on the 1st of June. Comparatively, that’s almost 500 more downloads than for May. It means an average of 150 daily players, which keeps blowing my mind. The game has got a couple of nice video reviews that may explain this (not to mention the ongoing monthly recap series by Petjeh).

A YouTuber with 12K subscribers can sure help a bit spreading the word.

This one is in Indonesian so I’ve no idea what he’s saying, but he seems to have fun.

Something unexpected also happened. The amazing Justin Arnold, who develops RPG in a Box, the engine I’m using, had the great idea to update the control scheme in first-person view. So it’s now possible to hold the left mouse button to move forward and simultaneously hold the right button to look around and change direction. Instead of clicking a distant tile and holding the right button to look around during the ride, you can now choose to control every step of your walk, without the clunkiness of the keyboard. A few people complained about the controls, so this is indeed a very welcome addition, and also a new way of experiencing the game. It somehow feels a bit like racing game, where the goal isn’t to go fast or avoid obstacles, but to make the camera turn as smoothly as possible to keep that ambient flow intact.

Regarding level design, there’s not much to say. I’m starting know what works and what doesn’t, but that doesn’t prevent me from building levels I don’t like. It’s still quite hard to design balanced levels. I’d say a good level doesn’t feel repetitive nor predictable, avoids losing the player in a massive coloured void, has interesting landmarks and points of view, and has music with a rhythm that complements its colours and structure. And yet, all these elements put together create something very subjective, that can feel satisfying or not depending on who’s playing. They can even contradict themselves. Symmetry is usually predictable, but visually pleasing. Repetitiveness can be aesthetically striking, but dull to explore. Music can be dissonant, but create a unique atmosphere. Reaching the exit within 10 seconds or 3 minutes can feel surprising or boring. A beautiful screenshot can hide a bland level, while one I hate will get more likes and retweets than any other before. I suppose it’s all in the eye of the player. 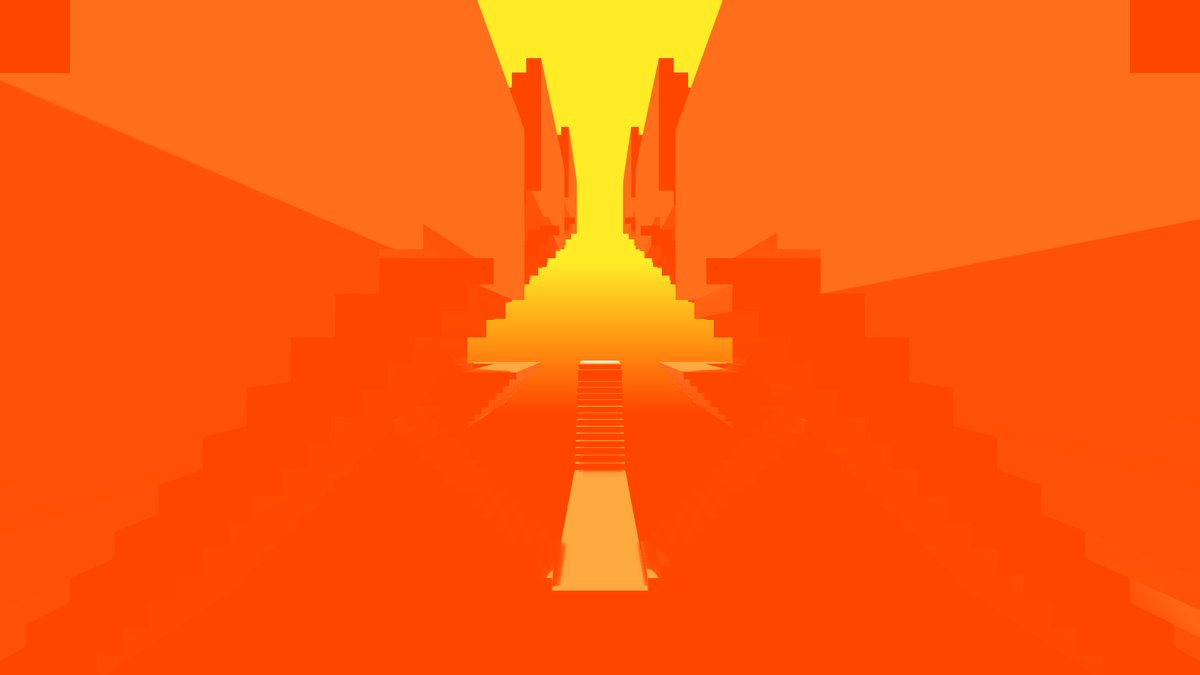